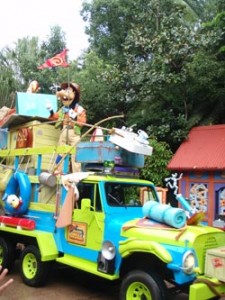 Disney is full of little secrets not everyone knows about, either because it’s not advertised, or because it’s really just something pretty small for folks to pick up on.

One such little secret involves the Buzz Light Year ride.  If you hit the giant robot on the inside of it’s left hand you will gain an additional 100,000 points for your efforts.  Also, drink as much soda as you can possibly fit inside the Coca Cola Zone in Epcot.  WHY??

Another secret is there are little less traveled pathways to help you avoid heavy human traffic and can shave minutes off your time so that you can devote more of it to rides and fun. How do you find these?

Another not so secret secret is the hidden Mickey’s.  It’s up to the visitor to find them, although there is a book available to help you out a bit.

If you are staying at the Polynesian Hotel, you can lie in a hammock on the beach and see the Magic Kingdom fireworks, as well as the Water Parade.

If you go to Towns Square, there are several American flags being flown.  The main one is taken down at sunset.  The rest are left alone because they aren’t ‘real’ American flags.  They are missing a star or stripe or something that makes them fake.

Years ago, when the Pirates ride was being built, a maintenance guy named George was killed.  According to legend, he haunts the ride to this day and all the ride workers have to say ‘Goodnight George’ every night before shutting down the ride, or suffer consequences with the ride the next day!  There is also a rumor that if you yell George 3 times during the fire scene something odd might happen.  Entirely up to you if you want to test that rumor though!

Rumor has it, that the dog holding the keys in Pirates of the Caribbean and the dog in Carousel of Progress – both are old Walt’s dog.

On Splash Mountain, in front of the big drop, there is a bridge there.  When the log boats hit the bottom of the big drop, on every third one, a water cannon shoots an extra stream of water and soaks any bystanders who happen to be hanging out on the bridge.

Also inside Splash Mountain, there is a little animal that drops out of the ceiling in the cave-like room just before the last drop and shouts out ‘Go FSU!’.  The engineer who installed him was an FSU graduate.

When you go inside Tink’s Treasures, if the music is playing Tinker Bell has already been awakened.  If you go straight to the store as soon as the park opens, you can have the opportunity to wake Tinker Bell up yourself.  They give you a wand and let you tap on the treasure box and say ‘Wake Up Tink’ three times.  Then the music starts and you are awarded a certificate saying you have experienced a ‘Magical Moment’.

Inside Tomorrowland, there is a talking trash can named Push that comes out of Mickey’s Star Traders and roams around every hour for about 20 minutes or so.  There are also metal ‘palm trees’ that bloom during the day like flowers and fold up at night.

And finally, while there are many more secrets and little known facts about Disney, here is my last one for you at this time:  At the Mickey’s Toon Town entrance, near the tea cups, if you get there just before 10am, you will be escorted into Toon Town by several Disney characters personally!  How is that for a grand entrance eh?